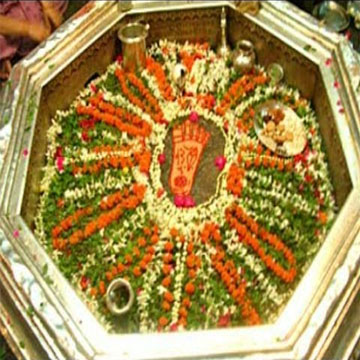 This is an offering in the memory of the dear departed. If for three consecutive years the offerings are not made to the dear departed then the dead gets vehement, so to calm them these offerings are made. Tripindi Shraddha Pujan is perfomed or problems like hurdles in child birth, evil eye, ancestor Moksha (i.e Nirvana), removing Gau hatya dosha. (i.e killing of cow which is considered as God or a holy animal in Hindu religion). One month of humans equals one day for the dead. The day of new moon is the lunar day for the dead. On this day Darsha shradha is performed. Unsatisfied dead harasses in the form of demon. Cancellation of rites meant for the forefathers, denying offerings made in the memory of the dear departed and spiritual procedures if not performed as per the traditions then problems may arise from goblin, corpse, demi-gods, of the sky/ bodies, the 27'th lunar mansions and demons and may led to religious discord.
Such tribulations may occur intermittently and may span in a period of one day, three days or fifteen days. It may also lead to delay in marriage prospects, failure in business, receding prosperity day after day. Tripindi Sharddha Pooja can be performed only at Trimbakeshwar near Nashik dist. in Maharashtra, India.
This is a Kaamya shraaddha with a certain desire. If shraaddha is not performed for three continous years then the souls become preta or ghost and torment the non-performer. The life becomes disturbed due to this non performance. Business losses and failures occur and prosperity declines. This has to be performed mainly in Gaya kshetra. The trinity of Lord Brahma, Lord Vishnu and Lord Mahesh are the three main deities.