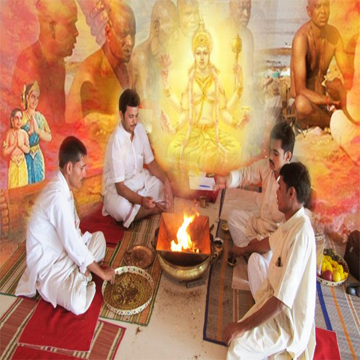 Narayan Nagbali consists of two different rituals. Narayan bali is done to get rid of ancestral curse (Pitru Shaap) while Nag bali is done to get rid of sin performed by killing snake , specially Cobra which is worshipped in India.It can be performed only at Nasik Trimbakeshwar.For Problems like Bhoot Pishach Badha, unsuccessful in Business, Waste of Money, Family health Problems, Argument with others, Educational hindrances, Marriage Problems, Accidental Death, Unnecessary expenses, Health problems in many family members, All kind of Curse (shrap). Narayan Nagbali is performed to get respite from various problems.
Narayan Bali ritual is done to fulfill the unsatisfied desires of the ancestral souls which are stuck in the world and trouble their progeny. Narayan Bali consists of the same ritual as hindu funeral. An artificial body mostly made of wheat flour is used. Mantras are used to invoke such souls who are having certain wishes remaining attached. The ritual makes them possess the body and the funeral frees them to other world.
Narayan Nagbali is one of the main rituals performed at Trimbakeshwar. Ancient scriptures like Dharma Sindhu, which describes various religious rites, mentions that this particular ritual should be done only at Trimbakeshwar. The references are found even in Skandh Puran and Padma Puran about this age-old tradition.It gives good health, success in business and career and fulfils wishes. It is a three-day ritual on a particular day and time (muhurta). On the first day, the devotees should take a holy bath in Kushavarta and resolve to give dashdaan (give ten things in charity). After offering prayers at the Trimbakeshwar temple, they go to the dharmashala at the confluence of rivers Godavari and Ahilya for performing Narayan Nagbali.